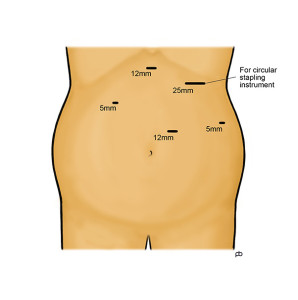 The gastric bypass operation is done by keyhole su...
2 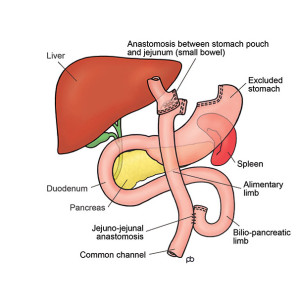 Surgical staplers are used to make a very small co...

What is a gastric bypass operation?

How does a gastric bypass work?

The gastric bypass gives you a feeling of fullness after eating a small meal. Also, it controls your appetite so you do not feel hungry until it is time for the next meal. These effects happen because the gastric bypass reduces the working size of your stomach. This is called the restrictive effect of operation. Also, there are changes in the levels of several hormones that control your hunger, fullness and blood sugar levels. These hormones are released from special cells in the lining of the small bowel and the stomach. Because of these changes in hormone levels, you can feel as if a switch has been turned off in your head. One of these hormones (called GLP-1) also controls blood sugar levels. In fact, injections of GLP-1 (Byetta® or Victoza®) are given to some patients with diabetes to bring down blood sugar levels. After a bypass, there can be marked increase in the release of GLP-1 from the bowel. It is like a free, internal injection of GLP-1. This is one important reason why the bypass is effective for controlling diabetes, over and above weight loss. The gastric bypass does not cause malabsorption of carbohydrates and fats.

How much weight can I lose with the gastric bypass?

Your weight loss will depend on your starting BMI and gender. Please remember that there are no guarantees in weight loss surgery.

What is the follow-up care for gastric bypass?

Advice About Diet and Lifestyle

You will be given advice by Mr Sarela, dieticians, nurses and other healthcare professionals. It is vital that you listen to the advice and discuss any problems or concerns. The dietician is a particularly important person. She will give you detailed instructions. Please keep in regular touch with the dietician.

You will need to take a multi-vitamin and mineral capsule, calcium and vitamin D combination tablets, and iron tablets daily. For the first 4 weeks after the operation, you should take these medicines as syrup or dissolvable tablets or chewable tablets only. Afterwards, you can take whole capsules or tablets. Also, you should take a vitamin B12 injection every 3 months. You will need to see your GP to get a prescription for these medicines. A detailed discharge summary will be sent to your GP, explaining the medicines and follow-up tests. Please make an appointment to see your GP soon after your operation. The drugs need to be taken life-long. The dosage may need to be changed, according to results of tests. Also, you may need other medicines, based on test results.

You will need to have blood tests regularly at your GP’s centre. The tests should be done 3-monthly during the first year, and then one-yearly. The tests may have to be repeated more frequently if some problem is found. Detailed information will be sent to your GP to request these tests. Please contact your GP’s centre to make appointments. For more information about follow-up medicines and tests, see the guidance from the British Obesity and Metabolic Surgeons Society.

WHAT ARE THE RISKS FROM GASTRIC BYPASS?

Think about overall risks from weight loss surgery  and risks for specific complications from gastric bypass.

Bleeding can happen from blood vessels that had to be divided during the operation or from the staple-lines on the stomach and small bowel. Bleeding that is obvious during the operation can be controlled. But, bleeding can sometimes develop after the operation. Post-operative bleeding usually happens within the first 24-48 hours after the operation. Bleeding can happen from the outside or from the inside of the staple lines. If bleeding is from the outside of the staple-line, the blood collects within your abdomen (tummy) and usually causes severe pain. If bleeding is from the inside, you may bring up blood or pass blood in your bowel motion. Another keyhole operation (re-laparoscopy) or endoscopy and blood transfusion may be needed for the treatment of post-operative bleeding. Bleeding happens in about 1-2 in 100 operations.

Leakage means that stomach juices seep into your abdomen (tummy) and cause serious infection (called peritonitis). Leakage happens because of a weakness or gap in the staple-line at the join between stomach and the small bowel. The join is tested carefully with a blue dye to check that it is watertight. Leakage usually becomes apparent during the first few days after the operation. But, occasionally it can remain silent for some weeks. Leakage will declare itself with pain in your abdomen (tummy), fever and make you feel generally quite unwell. The treatment of leakage depends on the severity of the infection. If there is collection of infected fluid around your stomach, insertion of a drainage tube under x-ray guidance may be sufficient. For more serious or generalised infection, further surgery (re-laparoscopy) and endoscopy with placement of a stent may become necessary. You will need nutrition by a tube placed through your nose or into a vein until healing is complete. Leakage happens in 1-2 in 100 patients.

Stenosis or narrowing of the join between the stomach pouch and small bowel occurs in about 1 in 10 patients. Excessive scarring, during the healing process, may obstruct the passage of food and even liquid, leading to vomiting. In such cases, an endoscopy may become necessary in order to dilate or stretch the anastomosis. Dilatation is usually a fairly straightforward procedure that is done under sedation on a day-stay basis. Rarely, another operation may become necessary.

Repeated episodes of spasm-like or colicky central abdominal, even if only mild, should raise concern about an “internal hernia”.

The re-arrangement (or “re-plumbing”) of the intestines in the gastric bypass results in the creation of spaces or “defects” in the fatty tissues (mesentery) that tether the intestines within the abdomen. These defects are closed with sutures, during the operation. However, with loss of fat, the defects may open out and loops of intestines can pass through these defects, creating an internal hernia. Such herniation can result in obstruction of blockage of the intestine; however, because of the unique arrangement in a bypass, obstruction may not cause typical symptoms, such as bloating or vomiting. X-rays, including CT scans, often do not pick up an internal hernia and may show normal appearances.

A definite diagnosis of an internal hernia is best made by re-laparoscopy and such an operation should not be delayed, despite normal x-rays reports, if abdominal pain persists. The intestines can be restored to their normal position and the defect in the mesentery can be closed by laparoscopic surgery. It is important to repair an internal hernia promptly because delay can lead to “strangulation” (loss of blood supply) of the intestine with potentially serious complications.

Rarely, an ulcer may develop at the site of the join between the stomach pouch and the intestine (called an “anastomotic ulcer”); this could occur months or even years after the operation. The inflammation associated with ulcer may cause narrowing or stenosis of the anastomosis. With proper technique in the creation of the stomach pouch, ulceration is very uncommon. Smoking or regular use of non-steroidal anti-inflammatory drugs (e.g. ibuprofen) increases the risk of ulceration. Ulcers usually heal with medication but, occasionally, re-operation may be required.