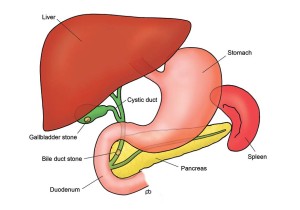 Your gallbladder connected to your bile duct – t...
2 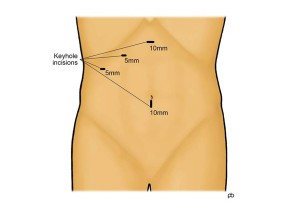 The gallbladder is removed by keyhole surgery. The...
3 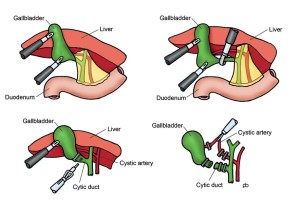 The gallbladder gets it blood supply via the cysti...
4 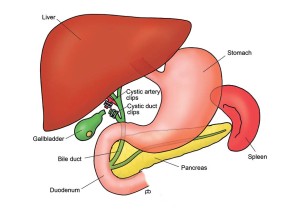 The cystic artery and the cystic duct are sealed w...
5 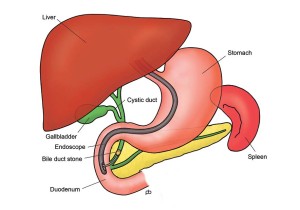 Stones in your bile duct can be taken out by endos...

What is the gallbladder?

What is the function of the gallbladder?

Why do stones form in the gallbladder?

Gallbladder stones – called gallstones – develop because of deposition of crystals of cholesterol, bile pigments, calcium and other substances from bile. The crystals get deposited and enlarge to form stones when there is change in the composition of bile, or if the gallbladder does not empty properly. There are many risk factors for the formation of gallstones. The risk is higher is women than in men. The risk is increased by pregnancy, oestrogen hormone treatment, certain genetic traits, obesity and rapid weight loss. Certain blood diseases, called haemolytic anaemias, increase the risk for pigment gallstones. The composition of the gallstones does not change treatment. There is no good evidence that change in life-style can prevent or dissolve gallstones.

What problems are caused by gallstones?

Gallstones can cause many problems

You get gallbladder pain in the upper part of your abdomen (tummy), usually on the right side. Eating fried food or other high-fat food often brings on the pain. Along with pain, you can get nausea, bloating of your abdomen and flatulence.

You get a sharp, spasm-like pain in the upper right side of your abdomen. The pain often radiates from the front to back, just under the right side of your rib cage. The pain may radiate also to your right shoulder blade. Usually, the pain is most intense for about 30 minutes, and then wears off.

The gallbladder gets filled by clear, mucous-like liquid. A mucocoele forms because the outlet of the gallbladder – the cystic duct – is blocked by a gallstone.

Jaundice is a condition in which there is yellowish discolouration of your skin and eyes because of high blood levels of bilirubin. Bilirubin is a pigment that is made in your liver and it is carried in the bile to your bowel. Bile passes from the liver to the bowel through the bile duct. Obstructive jaundice is a condition in which the bile duct is blocked by gallstones that passed out from the gallbladder into the bile duct. The bile backs up in the ducts, and bilirubin refluxes back into the blood stream and causes jaundice.

This is a condition in which there is obstructive jaundice and infection in your bile ducts. Cholangitis should be suspected if you get pain in the upper right side of your abdomen, jaundice and fever.

How are Gallstones diagnosed?

Gallstones (gallbladder stones) are diagnosed by doing a scan of your gallbladder. Most commonly, it is an ultrasound scan. Ultrasound is an accurate test for stones in your gallbladder, but it may not detect stones that have passed into your bile duct. Stones in the bile duct are suspected if the duct appears dilated (swollen) on ultrasound scan. Also, bile duct stones may be suspected by abnormalities in blood tests (called liver function tests). The bile ducts can be checked by a special MRI scan, called called MRCP (Magnetic Resonance Cholangio-Pancreaticography).

What is the treatment of gallstones?

Does everyone with gallstones need an operation?

You have symptoms that are typical for gallstones, like biliary colic. Or, you have had a complication of gallstones, like acute cholecystitis, obstructive jaundice, cholangitis or acute pancreatitis. Laparoscopic cholecystectomy is generally advisable, unless you have medical conditions that make the operation excessively high-risk.

You do not have any symptoms from your gallstones, and you have not had any complication from gallstones. The gallstones were found incidentally during a scan of the abdomen for some other purpose. It is difficult to predict whether asymptomatic gallstones will cause problems in the future. Generally, an operation is not recommended for asymptomatic gallstones. It is better to wait and watch rather than to do pre-emptive surgery. But, there are some unusual circumstances in which an operation may be desirable.

What is the treatment for stones in the bile ducts?

Stones from your gallbladder may have passed into your bile ducts. Stones can be removed from the bile duct in two ways:

A special telescope-like camera is passed through your mouth, and the stones are removed by passing instruments through the opening of the bile duct into the bowel. This procedure is called ERCP (Endoscopic Retrograde Cholangio-Pancreaticography). Usually, ERCP is done before the laparoscopic cholecystectomy operation. But, bile duct stones may be found during the operation. An x-ray of the bile ducts, called an intra-operative cholangiogram, is done usually during the operation because we know that pre-operative tests may not always pick up bile duct stones. Post-operative ERCP may be needed if stones are found on the cholangiogram.

Bile duct stones can be removed by doing surgery on the bile ducts, along with removal of the gallbladder. This can be done by keyhole surgery. There are various pros and cons for ERCP versus bile duct exploration, and the choice depends on your individual circumstances.

What is Laparoscopic Cholecystectomy?

What are the risks from Laparoscopic Cholecystectomy?

Most people may a straightforward recovery and serious complications are rare. But, all keyhole (laparoscopy) operations on your abdomen (tummy) carry some risks. There is some risk of excessive bleeding whilst separating (dissecting) the gallbladder from the liver. A rare but very serious risk is injury to the bile duct. This is the tube that carries bile from the liver to the bowel. Bile can leak out in to the tummy from the bile duct and cause serious infection. The treatment of bile duct injury can require endoscopy (called ERCP) and major corrective surgery. If the gallbladder is very stuck to the bile duct, then a sub-total cholecystectomy is done. Here, a small part of the wall of the gallbladder is left on the bile duct in order to protect the duct.

A polyp is growth from the wall of the gallbladder. The concern is about the risk of transformation of a polyp into cancer. But, not everyone with gallbladder polyps needs an operation to remove the gallbladder. In some cases, no action is needed or periodic monitoring by ultrasound scan may be sufficient. For others, a cholecystectomy operation is advisable. The decision about whether or not to do an operation depends on several factors, such as the size, shape and numbers of polyps, symptoms and age.