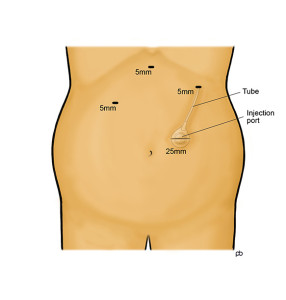 The gastric band is placed by laparoscopy or keyho...
2 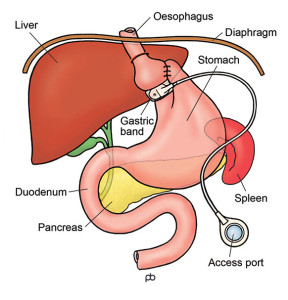 The band is placed around the uppermost part of yo...
3 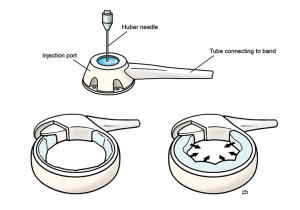 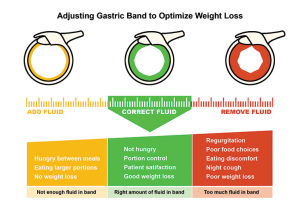 The aim is to adjust the band so that you come int...

What is a gastric band?

About 1 in 4 weight loss operations in the UK is the gastric band (stomach band). The operation is done by laparoscopy under general anaesthesia in Leeds. 4-5 small cuts are made on your abdomen (tummy). The operation takes 45 minutes to 1 hour. Recovery is quick.

The band has three parts. There is the actual band – the belt or collar that goes around your stomach, just below where your oesophagus (gullet) joins your stomach. The band is made of a special plastic called silicone. During the operation, a special tube (called a bougie) is passed into your stomach from your mouth. This tube has a balloon at its tip and the balloon helps to place the band in the correct position. The stomach is stitched around the band in order to hold the band in place. The band is connected by a tube to small hollow disc, called the injection port. The port is fixed to the muscles of your abdominal (tummy) wall, below the skin. You cannot see the port but you might be able to feel it if you press hard. Sterile liquid can be put into and taken out from the port with a needle. It is very much like having an injection. The liquid in the port passes through the tubing to the band, which expands and compresses your stomach.

How does the gastric band work?

The band is like a tyre. It can be inflated or deflated by putting in or taking out liquid from the injection port. When the band is inflated, it will compress the walls of your stomach. Compression of the stomach wall reduces hunger and makes you feel full quickly after eating a small meal. It is believed that compression stimulates nerve endings in the stomach wall and creates signals of less hunger and more fullness. The aim is make you feel full after a small, healthy meal and not feel hungry until your next mealtime.

There is no liquid (or only a very small amount of liquid) in the band immediately after the operation. The band is kept empty intentionally so that it can settle into position. The first filling of the band is done about 4-6 weeks after the operation under x-ray control. You will be asked to drink a dye called barium so that compression of the stomach can be seen whilst filling the band. Most people will need 2-4 band fills to get a good sense of restriction of hunger and fullness. After the first x-ray guided band-fill, subsequent band-fills are done in the outpatient clinic. A barium swallow x-ray may be used again if your progress is not as expected. Sometimes the band may become too tight after a fill, and some liquid may need to be taken out. There is some trial and error in band-adjustment. You can think of it as fine-tuning of the band. After each band-fill, you should take only soft food for 2-3 days and then gradually build up to normal food. It is best to leave 2-4 weeks between band-fills.

How will I know when my band is properly adjusted?

The aim is for you to get a feeling of fullness quickly after eating, so that you can control your portion-sizes. Also, your appetite should be controlled so that you do not feel hungry between mealtimes. But, the band should not be over-filled. If the band is too tight, you can get difficulty to swallow, regurgitation and heartburn. Liquid will need to be taken out from the band. The idea is for you to feel satisfied with small, healthy meals. This is called the green zone of the band [link to/insert diagram on zone of band adjustment here]. Mr Sarela and the specialist dietician will guide you through this process.

Will I need any more band-fills after the band has been adjusted?

As you lose weight, there can be some increase or decrease in the sense of restriction from the band. There can be loss of very small amounts of liquids from the band over time and top-ups may be needed. Some people increase their physical activity to a level where they need extra nutrition and want less restriction. The band is a life-long tool for weight control. Periodic maintenance will be needed.

Is there special equipment for band adjustment?

It is very important to use a special needle called the Huber needle. The injection port of the band has a membrane that allows the needle to enter into the port. An ordinary injection needle can tear this membrane and allow the liquid to leak out. If this happens, the band stops working and an operation will be needed to change the port. The Huber needle has a special type of tip – called a non-coring tip – that does not damage the membrane.

Is the gastric band a reversible procedure?

How much weight can I lose with a gastric band?

Your weight loss will depend on your starting BMI and gender. Please remember that there are no guarantees in weight loss surgery.

What is the follow-up for a gastric band?

Apart from band-adjustment, lifelong medical follow-up is essential. This can be done with your GP. A detailed discharge summary will be sent to your GP, explaining the follow-up. Please make an appointment to see your GP soon after your operation. You can think of the follow-up care in 3 parts:

Advice About Diet and Lifestyle

You will be given advice by Mr Sarela, dieticians, nurses and other healthcare professionals. It is vital that you listen to the advice and discuss any problems or concerns. The dietician is a particularly important person. She will give you detailed instructions. Please keep in regular touch with the dietician.

You should take a multi-vitamin and mineral capsule daily. For the first 4 weeks after the operation, you should take multi-vitamin syrup or dissolvable tablets only. Afterwards, you can take whole capsules or tablets. We recommend that you get a prescription for Forceval® from your GP. These multi-vitamins need to be taken life-long.

You will need to have blood tests annually at your GP’s centre. The tests may have to be repeated more frequently if some problem is found. Please contact your GP’s centre to make appointments. For more information about follow-up medicines and tests, see the British Obesity & Metabolic Surgery Society‘s guidance.

What are the risks from a gastric band?

Think about overall risks from weight loss surgery and risks for specific complications from a gastric band.

There are very small risks of bleeding and injury to the oesophagus (gullet) or stomach during placement of the band. Infection around the injection port is another rare but serious problem. It is very difficult to get rid of port infection with antibiotics and it may become necessary to remove the port or the whole band.

Late or long-term complications from a gastric band

The band can slip out of the position in which it has been placed around the stomach. Slippage happens in about 1 in 20 patients. A slipped band can cause tummy pain, acid reflux, sickness or difficulty to swallow. A barium swallow x-ray will show that the band has slipped. A slipped band should be emptied completely. The band may return to its normal position after emptying if the slippage was small. But, most people with slippage will need an operation. In some cases, the band can be placed back into good position. But, for most people, a slipped band will need to be removed. There can be serious damage to the stomach if band slippage is not treated properly.

The injection port of the band on the tummy wall can turn over: this is called a ‘flipped’ port. The band-fill needle cannot enter a flipped port. An operation will be needed to correct the position of the port. Another problem is leakage of fluid from the band. If the fluid leaks out then restriction is lost. Leakage usually happens because the tubing has broken. An operation is needed to re-connect the tubing. If the leakage is from the band itself or the port, these parts will need to be replaced.

The muscles of the oesophagus (gullet) can stop working properly and the oesophagus becomes swollen. This happens in about 1 in 200 patients. There can be acid reflux and sickness. The band should be emptied, and may need to be removed.

Some people are just not able to work with the band and need an operation to remove the band.

Please bear in mind that about 1 in 5 patients will need to have another operation to remove the band because of some problem.